At the MPA we are proud to stand with our LGBTQIA+ friends, families and colleagues and we will be celebrating the LGBT+ History Month theme of Politics in Art.
Keep an eye on this page for links, blogs & information this LGBT+ History Month.
For further information on MPA Group’s LGBTQIA+ initiatives and for LGBTQIA + support, help and advice, please see contact details after the quiz below. 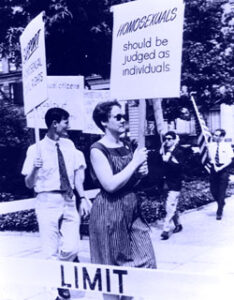 Well known for leading the successful movement to change the psychiatric and psychological professions’ view of homosexuality as a mental pathology.
Thanks to her, in 1973 the American Psychiatric Association revoked its designation of homosexuality as a disorder. She fought for LGBTQ+ rights since the 1950s almost a decade before Stonewall.
Barbara Gittings | LGBT 50th Anniversary July 4, 2015

The chief organiser of the 1963 March in Washington. This is the very same march where Martin Luther King Jr. delivered his famous ‘I Have a Dream Speech’.
He was proud of his identity as a Black and gay man and refused to be closeted even during the 1940s and 50s. In 2013, President Obama posthumously awarded Rustin the Presidential Medal of Freedom.
Rustin’s long time partner, Walter Naegle accepted the medal on his behalf.
Bayard Rustin – Quotes, Education & Facts – Biography

The English nobleman and Physician (born Laura Maud Dillon) lived life as his true self. According to Australia’s Gender Centre, Dillon was the world’s first transgender man to undergo gender-affirmation surgery. In 1946, he published a book about what is now known as transsexualism – Self: A Study in Ethics and Endocrinology. This book drew much-unwanted attention to him. It cost him his family, his claim to peerage and his medical career. He fled to India, became a Buddhist monk and author of two books about spirituality.
MichaelDillon (beaumontsociety.org.uk)

An American artist, gay rights activist and designer of the iconic rainbow flag which debuted back in 1978.
The flag has since become widely connected with LGBTQ+ rights. He created the world’s largest flag to celebrate the 25th anniversary of Stonewall riots.
The home of Rainbow Flag creator Gilbert Baker and the memoir RAINBOW WARRIOR.

A gay liberation activist, African-American transgender woman and one of the prominent figures in the Stonewall uprising in 1969.
Marsha was passionate about equal rights and co-founded the gay and transvestite advocacy organization S.T.A.R. alongside Sylvia Rivera.
Pride Month: Who was Marsha P. Johnson and why were they so important? – CBBC Newsround

An Irish gay rights activist. He co-founded the ‘Lesbians and Gays Support the Miners Movement’ with Mike Jackson.
The group took part in the 1984 Lesbian and Gay Pride march in London for the miners on strike. This story was later celebrated in the 2014 film Pride.
Mark Ashton – LGBT Archive (lgbthistoryuk.org)

An English film director. He was a hugely influential, high-profile figure in the 1980s and 1990s, during a period where there were very few famous ‘out’ gay men. He founded the London Lesbian and Gay Centre at Cowcross Street, attending meetings and making contributions. He was an active campaigner and took part in the 1992 March on Parliament, participated in some of the best known protests including the march on Parliament in 1992.
Derek Jarman – Wikipedia

A Hong Kong singer and actor. He is considered “one of the founding fathers of Cantopop” and was successful both in film and music.
Cheung rose to prominence as a teen heartthrob and pop icon in the 1980s, receiving numerous music awards.
He announced his same-sex relationship with Daffy Tong during a concert in 1997. In an interview with Time magazine in 2001, Cheung said he identified as bisexual.
Leslie Cheung – Wikipedia

In 2020, for the first time in history, Aisha Mughal became the first transgender woman to represent a country at the United Nations and become a member of the national delegation representing Pakistan in Geneva.
Mughal regards this as an achievement for the country as it has broken stereotypes and changed perceptions of transgender people.

The CEDAW (UN Convention on the Elimination of all Discrimination Against Women) – also known as the International Bill of Rights for Women – is a committee that works on the discrimination against women and ensures that they have equal access and opportunities in political and public life as well as in education, employment and health.

Mughal has been working with the Ministry of Human Rights as a transgender rights expert and focal person. She aims to create a safe environment for transgender people in Pakistan.

To find out more about Aisha Mughal, please click on the links below:
Trans woman makes history representing Pakistan at United Nations (pinknews.co.uk)
In a first: Transgender woman represents Pakistan at UN (tribune.com.pk)

During the 1920s, Gladys Bentley, one of Harlem’s most famous lesbians, proudly sang blues in a top hat and a tuxedo as her powerful voice rang out through the crowds. Bentley broke barriers as a Black gay woman living in the early 20th century, arriving in New York during the Harlem Renaissance when she was just 16 years old. As a child, she rejected femininity to wear her younger brother’s clothes and claimed this was because her mother was disappointed she was a girl. However, she began to feel more comfortable in boys’ clothes than in her own dresses. When she came out to her family, her mother took her to the doctors in an attempt to stop her from being attracted to women.

The early 1920s was also a time when Black culture was flowing through art, music, dance, literature and politics. She started singing at rent parties to make money which allowed people to raise money for their rent by charging their guests. Her fame grew and she began performing in clubs all around the country. She broke down barriers as she sang in the best clubs, becoming known as “America’s Greatest Sepia Player” and “Brown Bomber of Sophisticated Songs.”

To find out more about Gladys Bentley, please click on the links below:

Following abbreviation to recognise the diverse spectrum of sexual gender and identities:

Helpline in the UK
LGBT Foundation – Helpline and Email Support