The key facts in Music By Numbers 2019 include: 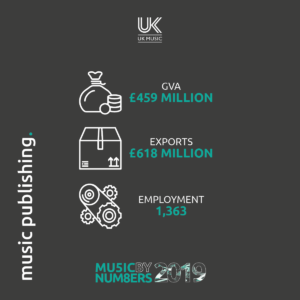 The flagship annual economic study by UK Music and its members showed that the music industry continued to grow last year across every sector. Successful British acts including Ed Sheeran, Dua Lipa and Sam Smith helped exports of UK music soar in 2018 to £2.7 billion. Millions of fans who poured into concerts ranging from festivals to grassroots music venues generated a contribution of live music to the UK’s economy of £1.1 billion – up 10% on 2017.

UK Music measures the health of the music business each year by collating data from our partners about the industry’s contribution in goods and services, known as Gross Value Added (GVA), to the UK’s national income or Gross Domestic Product (GDP). Exports are part of this contribution.

Although Glastonbury Festival did not take place in 2018 when the data for the report was collected, the rise in the number of other festivals across the UK, particularly in Scotland, such as TRNSMT and Sunday Sessions, boosted the numbers.

“Our report reveals firm evidence that the British music industry is in great shape and continuing to lead the world. The figures are hugely encouraging and show that, as well as enriching the lives of millions of people, music makes an incredible contribution to the UK’s economy. Live music is now at a record high and continues to draw millions of fans from both the UK and abroad to our arenas and smaller venues alike. Music exports are another amazing success story with the best of British creative talent being showcased across the globe. However, this is not a time for complacency. We face many challenges to ensure we keep our music industry vibrant, diverse and punching above its weight. We need to do more to protect grassroots venues by helping them combat soaring business rates. We need to nurture the talent pipeline, including by reversing the decline of music in education, so that children from every background have access to music. We need to make sure that creators get fair rewards for their content and are not ripped off by big tech. And we urgently need to ensure that the impact of Brexit doesn’t put in jeopardy the free movement of talent, just at the time when we should be looking outwards and backing the best of British talent right across the world”.

“Music by Numbers illustrates that the music industry continues to contribute to the impressive growth of our creative sectors. Encouragingly, it also demonstrate our industry’s importance to the UK’s economic growth. Song rights are at the very heart of the industry as a whole, an area where our music publishers thrive by investing in, driving value for and protecting the interests of their songwriters. Our community will continue to focus our efforts on maintaining and growing value in the music sector and the UK economy.” (Paul Clements, CEO, MPA)