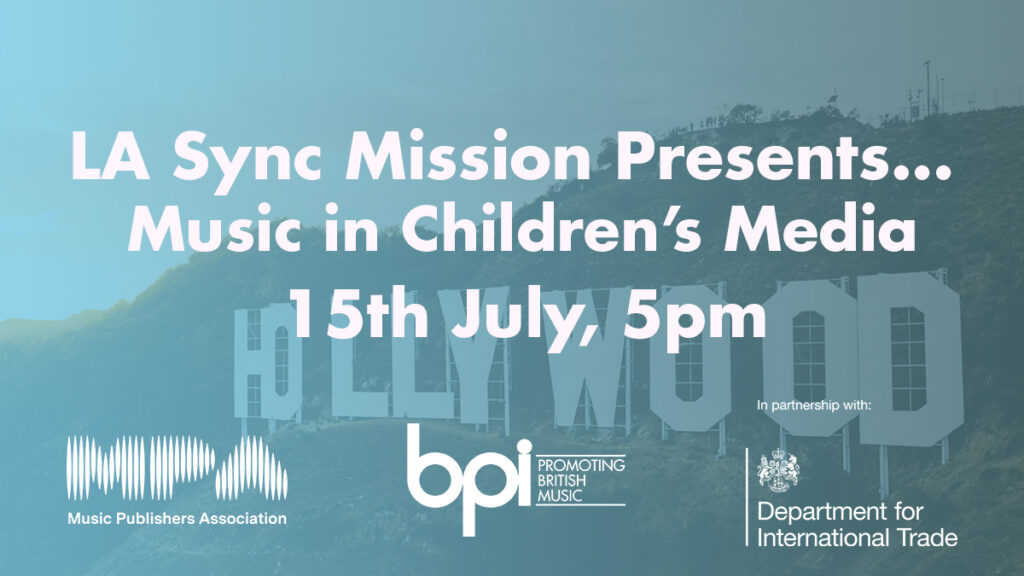 The BPI and Music Publishers Association in association with the Department for International Trade (DIT) are pleased to announce details of the first of three LA Sync international trade missions to be hosted in 2021, which returns for a 17th successive years.

Presented in webinar format and always popular with the UK’s music community of record labels, publishers, songwriters, composers and sync agents, this first virtual session on 15th July will take as its theme Music Sync in Children’s Media.

More names will be announced in due course, but speakers confirmed to take part date include Mark Gordon of Score Draw Music, who will moderate, Andy Ross of Exit Strategy Productions, and Rónán Ó Snodaigh of Rónán Ó Snodaigh Music.  Please see Notes to Editors for speaker bios and more details.

Attendance is free and those interested can register for tickets here (please note that attendees will be sent login details once their ticket is confirmed).

Chris Tams, BPI Director of International, said:
“The BPI is delighted to be partner once again with its friends at MPA and DIT for this latest LA Sync mission – one that taps into the growing excitement and interest in music sync and children’s media.  We’ve seen increasing attendance for all our trade webinars in recent months, and we hope that we can look forward to many more fresh faces attending the first of this year’s three LA Sync event.”

This latest LA Sync Mission Webinar follows the virtual event hosted on 5th December 2020 which took as its theme “The Genius of Advertising – Music Sync in the Ad World”.  On being announced the event prompted Emma McGann, Songwriter with X My Heart Records, to say: “The last LA Sync Mission webinar was by far the most insightful session I’ve attended virtually this year. I found every answer I’d been looking for and the panellists were both informative and transparent in their comments. It’s a must-go for anyone starting out in the world of sync, and I am looking forward to this next session.”